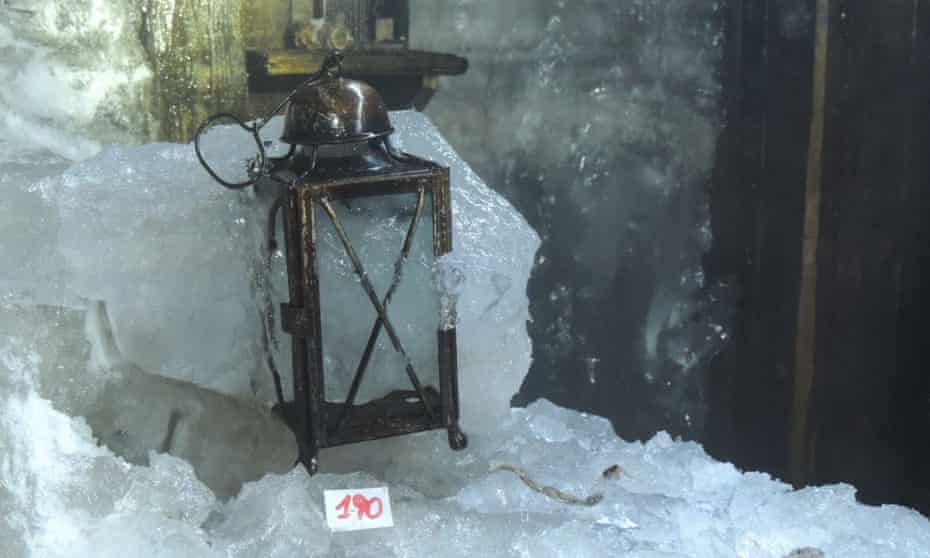 The soldiers dug the wooden barracks into a cave on the top of Mount Scorluzzo, a 3,095-metre (10,154ft) peak overlooking the Stelvio pass. For the next three-and-a-half years, the cramped, humid space was home to about 20 men from the Austro-Hungarian army as they fought against Italian troops in what became known as the White War, a battle waged across treacherous and bitterly cold Alpine terrain during the first world war.

Fought mainly in the Alps of the Lombardy region of Italy and the Dolomites in Trentino Alto-Adige, the White War was a period of history frozen in time until the 1990s, when global warming started to reveal an assortment of perfectly preserved relics – weapons, sledges, letters, diaries and, as the retreat of glaciers hastened, the bodies of soldiers.

The presence of the barracks on Scorluzzo’s summit was known for some time, but it was only in 2015, when the ice that had sealed it off for almost 100 years melted completely, that researchers were able to enter. The shelter had been hastily locked up when the war ended in November 1918, with the soldiers abandoning most of their belongings. Inside were the details of their daily lives: beds made of straw, clothes, lanterns, newspapers, postcards, coins, tinned food and animal bones empty of marrow. 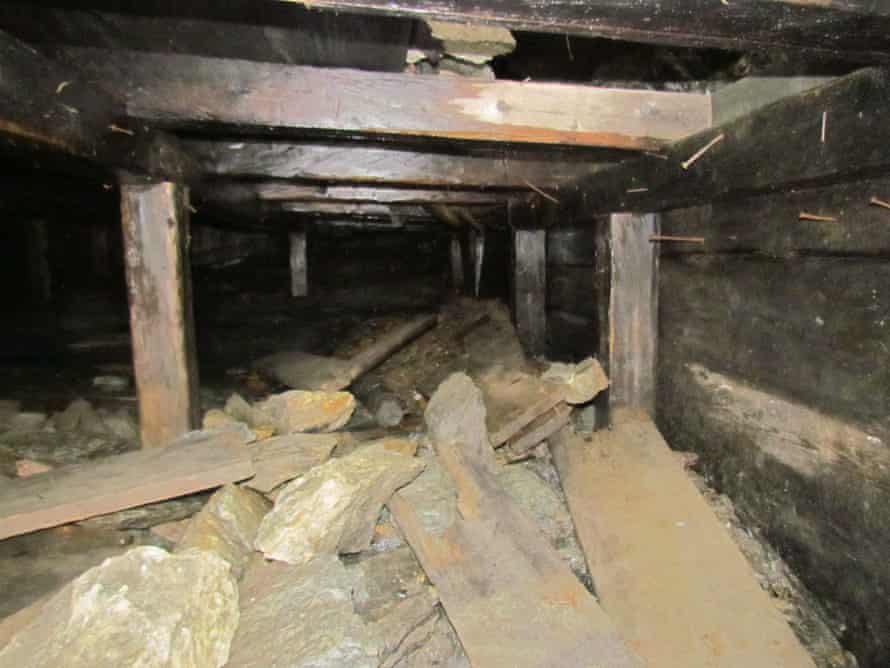 The cave has now been excavated, and the refuge and all its artefacts will go on display at a museum due to open in the Lombardy town of Bormio in 2022.

“The barracks is a time capsule of the White War that helps us to understand the extreme, starving conditions that the soldiers experienced,” said Stefano Morosini, a historian and coordinator of heritage projects at Stelvio national park. “The knowledge we’re able to gather today from the relics is a positive consequence of the negative fact of climate change.”

Many more soldiers are believed to have been killed by avalanches, falling down mountains or hypothermia than were killed during fighting. Dozens of corpses, some still in their uniforms, have emerged from the melting ice over the past decade. Last summer, a hiker stumbled across the remains of a soldier wrapped in the Italian flag on the Adamello glacier, part of a mountain range that straddles Lombardy and Trentino. In 2017, the relatives of an Italian soldier were able to bury him after documents revealing his identity were found with his body on Presena glacier.

“A corpse is found every two or three years, usually in places where there was fighting on the glacier,” said Marco Ghizzoni, a member of staff at the White War museum in Adamello who also helped to excavate the Mount Scorluzzo barracks.

Before the thawing of the soldiers’ icy tombs, the most extraordinary discovery of human remains on a melting glacier was made in 1991, when two German hikers found the 5,300-year-old mummified body of a hunter in the Ötztal Alps, close to Italy’s border with Austria. The body of “Ötzi the Iceman”, replete with tattoos, is on display at a museum in Bolzano.

“The Ötzi discovery was huge,” said Morosini. “Here was a relic of the prehistoric era, and today we are finding relics of the first world war.”

Ötzi paved the way for glacial archaeology. A rock with writing on it that is believed to date back 3,500 years was uncovered by the retreating Forni glacier, also part of Stelvio national park. 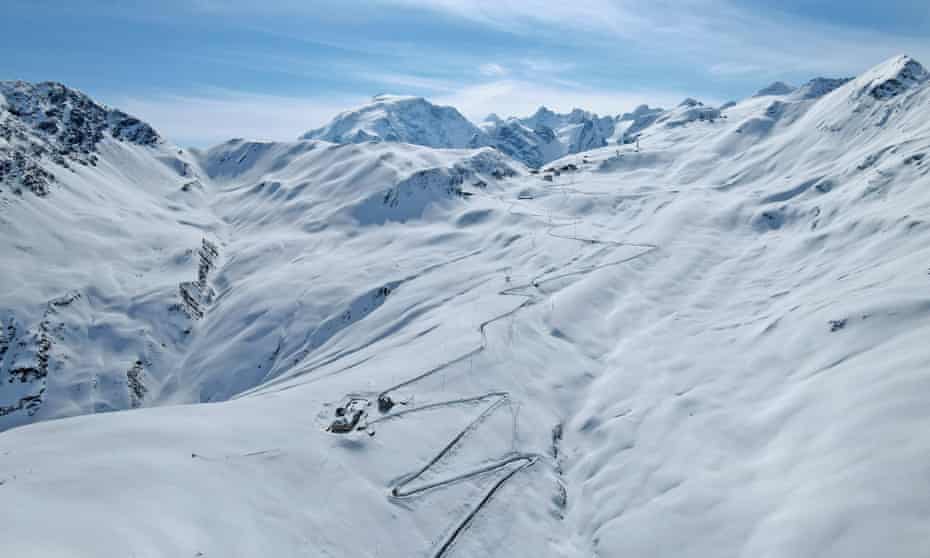 The effects of climate change are visible all across the Italian Alps. Forni, one of Italy’s largest valley glaciers, has retreated 800 metres within the past 30 years and 1.2 miles (2km) over the past century. In the summer of 1987, the guard of a shelter looking out towards Forni witnessed huge chunks of ice fall from the glacier amid days of heavy storms, eventually producing a rock avalanche that triggered the Val Pola landslide and killed 43 people.

Luca Pedrotti, a scientific coordinator at Stelvio national park, said the melting glacier was also changing the vegetation dynamic in the area, while rising temperatures had led to a reduction of wildlife populations, including chamois, a species of goat-antelope, and grouse. “Some species really suffer as they are very adapted to the cold Alpine environment,” said Pedrotti. “So they have to go higher and higher in search of cold temperatures and better-quality food.” 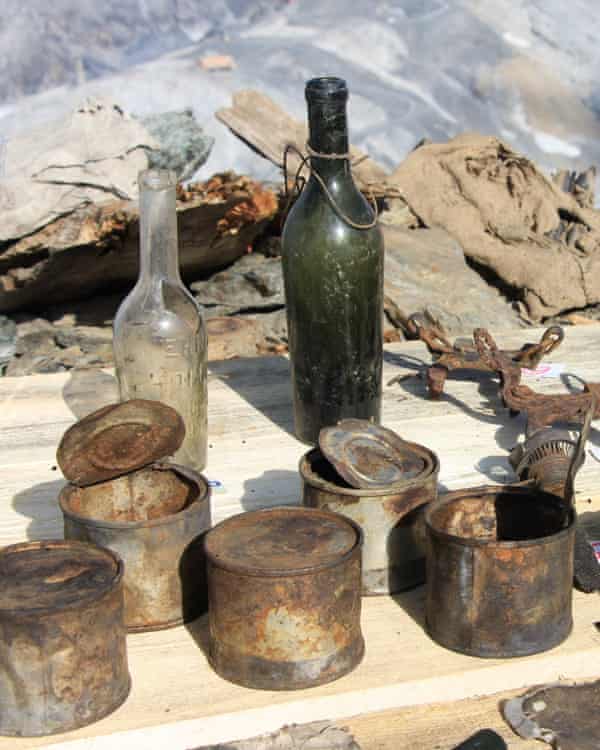 Pedrotti said human beings were as much responsible for the altered Alpine landscape as climate change. Close to Scorluzzo is the Stelvio glacier, where ardent skiers have flocked during the summer since the 1950s. “We have gone from a garden that was perfectly managed through cultivation, to a situation with lots of tourism – this has a strong footprint on the landscape,” Pedrotti said. “We need tourism but we also need conservation and the two things don’t always follow the same path.”

With grim climate forecasts, it is only a matter of time before glacial melting brings a stop to skiing at the Stelvio glacier.

A study published last year found that the melting of Italy’s glaciers is accelerating, especially at Marmolada, the largest and most symbolic glacier of the Dolomites.

“Marmolada is decreasing in volume so dramatically, and we don’t have a clue how to stop this process,” said Aldino Bondesan, a geophysics professor at the University of Padua and member of the Italian Glaciological Committee, which is monitoring 200 of Italy’s 900 glaciers.

Meanwhile, the changes in mountain permafrost in the Alps also risks triggering landslides.

“When I was asked 20 or 30 years ago whether I agreed with climate change, my answer was not as sharp as the one I give today,” said Bondesan. “The climatic models were not so clear … but now we have more than a century’s worth of data, and every time you go to the Alps, you see how much things are changing.”
Zum Vergrößern anklicken....
Quelle: Melting ice reveals first world war relics in Italian Alps
Um antworten zu können musst du eingeloggt sein.
Teilen: Facebook Zwitschern Reddit Pinterest Tumblr WhatsApp E-Mail Link
Oben